In January 2017, I became obsessed with money…

Not with actually having it but rather the concept of it.

I naively thought of “money” as just printed notes and coins as a medium of exchange for goods and services.

Not just any money but “Internet money”. They were talking about “Bitcoin” – and how it was revolutionizing the financial markets and changing the world.

Bitcoin and the technology that drives it, the “Blockchain” allows you to send money directly to anyone in the world in a safe and secure manner without relying on third parties intermediaries like banks.

You might think that online banking and Paypal already allows you to do this… well, yes and no.  When you transfer money online, it does not directly move between you and the receiver on the Internet.

It sits on closed private networks owned by banks and governments. Which means everytime you send money, you’re asking the banks permission (as well as paying fees) to move your money around in their systems.

Since money is a “store of value”, you store your money in banks for good reason because you want to protect that value.

Despite living in a digital world, we use banks because no one has ever figured out how to secure money in an open network (like the Internet) that would guarantee that our money could not be changed, copied or duplicated.

Bitcoin is the first ‘digital cash’ system that does this and whilst it has its own problems with scaling, it has the first mover advantage and the strongest network effect.

Bitcoin paved the way for over 1000 currencies that you see today. Coming from a financial background, I was curious to understand how a new asset class like Bitcoin would behave in a traded market…

Buying Bitcoin was not as simple as I thought it would be – in fact, the user experience was awful.

You can buy Bitcoin through exchanges, peer to peer markets, brokers or offline however there are ID verifications and trading limits…

As I began studying the world of cryptocurrencies, I would jot down notes about the blockchain, buying Bitcoin and investing in altcoins for my own personal reference.

Along the way, I would share those notes with friends who wish to get started in buying Bitcoin but couldn’t get past the technical jargon.

After writing 100 pages of notes, I conveyed to my boyfriend how I wish someone would write about blockchain and cryptocurrency trading in “Plain English” for a non-techie.

I had bought a couple of cryptocurrency ebooks from Kindle previously and the ones appearing on the first page as “best seller” books were simply… nonsensical.

They were either too technical and written for developers or filled with fluff without any practical information for beginners.

At the same time, my nerdy boyfriend was buying “Mastering Bitcoin: Unlocking Digital Cryptocurrencies” by Andreas Antonopoulos on Kindle for a technical deep dive.

He then said, “why don’t you arrange those notes of yours into a book to help others starting out?”.

Writing doesn’t come naturally to me and I usually write in bullet point form like a set of instructions. Personally, I wrote those notes as a resource to refer back on.

After much internal debate… I reasoned that there may be others in the same boat who would appreciate a beginners guide to understanding cryptocurrencies, the blockchain and trading. 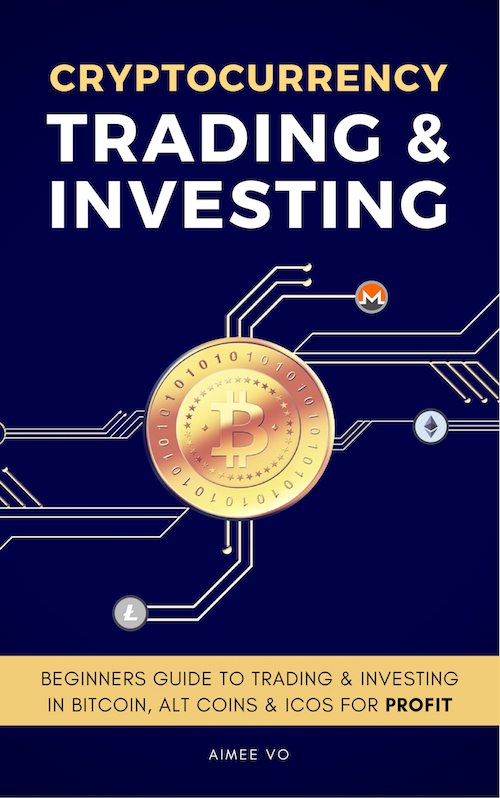 This leads us to the title of this post – Cryptocurrency Trading & Investing For Beginners (Part 1).

Instead of letting the book disappear into oblivion on Amazon’s shelves, over the next few days I will be releasing the first two chapters as blog posts.

The first chapter will cover the basics of cryptocurrencies and the blockchain and the subsequent posts will go further into buying Bitcoin.

So without further ado, here it is.

There’s a wealth of information published online by developers on the topic of cryptocurrency, however most of them are highly technical and not for beginners.

For a new trader or investor, it’s essential to understand the basics of the underlying technology that drives the cryptocurrency market.

What Is A Cryptocurrency?

“A cryptocurrency is a form of digital money that uses encryption to verify transactions between peers on a distributed ledger in a decentralized network”.

What does this mean? basically, cryptocurrencies allow two unknown people to safely and securely transfer money to each other from different locations without relying on a bank or government (decentralized network).

In reference to Bitcoin, financial transactions are added to a public ledger (known as the blockchain) via nodes on the Bitcoin network with consensus (agreement) achieved through a proof-of-work system.

This proof-of-work system is referred to as “mining”. Miners lend their computing power to solve complex mathematical equations to verify transactions on the blockchain. The miners who solve and verify transactions in a “block” are rewarded Bitcoins.

Bitcoin is the first cryptocurrency created in 2009 by the pseudonymous ‘Satoshi Nakamoto’ and is a distributed peer-to-peer payment system.

It’s known as a “digital cash” system that allows you to securely store and move money around the world without the requirement of banks or government authorities.

Bitcoin was created as a remedy to the 2008 Global Financial Crisis (GFC) when the value of US sub-prime mortgages caused a liquidity crisis in the banking system.

This led to big banks like Lehman Brothers’ filing for bankruptcy and resulted in the US Federal Reserve Bank injecting capital into the financial markets to save the economy.

You could say Bitcoin was designed to prevent monetary manipulation, bypass incumbents and empower its users. Since it’s 2009 launch, Bitcoin’s price has been nothing short but extraordinary.

In January 2017, the media called Bitcoin’s price of $797USD overvalued and analyst predictions of $1000 was considered absurd. Fast forward to November 2017, the price has risen to $7400 USD and resulted in a 640% increase.

The currency’s growth is driven by soaring demand from Asia. Japan, US, Canada, China and South Korea are among the dominant countries in Bitcoin trading volume. However, China’s trading volume may have changed recently given its recent ban on all ICOs.

On September 4th, 2017, China’s central bank declared ICOs illegal as they represent opportunities for fraud and scams. This led to Bitcoin losing approx. $500USD in value over the course of two days however the price has since recovered.

Now that you understand what Bitcoin is, let’s quickly talk about the technology that governs Bitcoin – the Blockchain.

On a high level, the blockchain is:

A blockchain is essentially a database of records on a public ledger containing all transactions that have been executed and shared among participating parties.

Each transaction in this public ledger is verified by a consensus of a majority of the participants in the system. Once transaction or information is entered on the blockchain, it cannot be tampered with or erased.

The term “the blockchain” is often confused with Bitcoin’s blockchain.

Juniper Research’s white paper on “Which Industries Are The Best Fit For Blockchain?” indicates those who are likely to benefit from blockchain technology are companies that:

Examples of industries that fit the above criteria and can benefit from blockchain technology are supply chain management, identity verification, title registration, insurance, manufacturing, banking/finance, retail, and healthcare etc.

Although the hype surrounding blockchain was originally focused on the financial services industry, as you can see blockchains have potential applications in a wide range of industries.

Bitcoin’s blockchain maintains a chronologically-ordered, time-stamped global ledger file of all transactions from the very start of its operation since 2009.

Every 10 mins, a block (i.e. a group of transactions) is added to the global public ledger file and all the nodes (also called miners) on the Bitcoin network keeps a copy of this global ledger file.

This global ledger file is not stored on a central server or data center like a bank. It is distributed across the world via a network of private computers that are both storing data and executing computations.

Each of these computers represents a “node” on the blockchain network and has a copy of the ledger file.

These computers nodes are miners who lend their computing power to solve complex cryptographic problems to verify users’ transactions on the blockchain.

Let’s say Tom wants to send Bitcoins to Jane, he broadcasts a message to the network that says the amount of Bitcoins in his account should go down by 5 BTC (Bitcoins).

Which means the amount of Bitcoins in Jane’s account should go up by 5 BTC. Each node in the network will receive the message and apply the requested transaction to their copy of the ledger, thus updating the account balances.

In order to perform transactions like sending Bitcoins in the blockchain, you will need a wallet – think of a wallet like a bank account which allows you to store and send your Bitcoins.

Since only you can spend your Bitcoins, each wallet is protected by a special cryptographic method using a unique pair of keys: a Public key and Private key.

A Public key is what the name suggests – Public. It is made available to everyone via a publicly accessible directory. On the other hand, the Private key must remain confidential to its respective owner.

Because the public and private key are pairs, it is mathematically related and whatever is encrypted with a Public key may only be decrypted by its corresponding Private key and vice versa.

When Tom wants to send Bitcoins to Jane, he needs to broadcast a message encrypted with the private key of his wallet, so only he can spend his Bitcoins.

Your wallet’s public keys are the “send to addresses” in the Bitcoin network, so when you’re sending Bitcoins to someone you are actually sending it to the public key of their wallet.

Basically sending digital currency requires you to encrypt the transaction request message but you never reveal your private key.

About every ten minutes, a “miner” who owns a node/computer on the network will try to solve a “block” that contains the latest transaction data in it, using cryptographic hash functions.

Once a miner solves the block, they broadcast the solution to all the miners in the network and are rewarded with Bitcoins.

The process of “Bitcoin mining” and how the blockchain works are explained below:

(Credit: Special thanks to Justin Dombrowski for explaining it to me like I’m 5)

The blockchain relies on the help of miners to verify and validate transactions and in doing so miners are rewarded with Bitcoins.

Initially, the number of Bitcoins rewarded per block was set to 50 BTC. That halved to 25 BTC in late 2012 and halved again to 12.5 BTC in 2016. The next halving event is expected around mid-2020. At the time of writing, a miner who successfully solves a block is rewarded 12.5 BTC.

Back in 2009, you could mine up to 500 Bitcoins in just a few days using a Pentium 4 personal computer. Those days are long gone, mining Bitcoin in 2017 requires much more computational power and investment in hardware like Application-specific integrated circuit (ASIC) mining rigs.

There are various models on the market and the popular AntMiner S9 mining rig and power supply units can cost you anywhere from $2000 to $4000 from Amazon.

To make Bitcoin mining a viable and profitable business, miners often set up their mining centers in cool climate countries where electricity is as low as 6 cents per kWh.

As for the number of miners in the Bitcoin network, no one really knows – there could be up to 50,000 miners located all over the world. However these days miners don’t mine alone, they pool their resources together and mine through “mining pools”.